Pathogenic fungi have become a major threat with a constant increase in the mortality rate among humans and also by causing a vast damage to the food and agricultural industries. Another emerging issue to be consider is a limited number of approved drugs and constant development of antifungal resistance against the frequently used fungicides, therefore, creating an urge for developing novel pragmatic strategies for combating fungal growth and development. Interestingly, the small antifungal protein (AFP from Aspergillus giganteus) belonging to a group of filamentous Ascomycetes turns out to be an effective and a highly potential inhibitor against the fungal pathogens. These small peptides of 6kDa having a potentially stable intramolecular disulfide bonds, predominant β-sheets and a net cationic charge found to play a crucial role in precluding the spore germination via disruption of the fungal membrane integrity without affecting mammals and plants. Thus, AFPs emerges as a most promising lead compound in the development of novel antifungal peptides.
In our current study, we try to identify the potential binding modes of the two  parental AFPs (i.e) PAF from Penicillium chrysogenum and AnAFP from Aspergillus niger to the fungal membrane at the atomic level. Besides, we also investigate the rationally designed library of chimeric AFP’s (cAFP’s) resulting from the combination of amino acid sequences of parental peptides AFP, PAF and AnAFP. Gaussian accelerated molecular dynamics simulation using CHARMM36 force fields are well suited for studying the system size of more than 360k atoms, by having four isoforms of each of the AFP and cAFP’s peptides above the fungal membrane surface to identify the potential binding modes of AFP’s and cAFP’s. Such a setup helps to investigate for any potential protein-protein aggregation and also provides a better statistics for the analysis without an increase in the simulation timescale of milliseconds. The expected results from this study is to identify the crucial molecular moieties contributing for a strong AFP and cAFP’s binding to the fungal membrane and whether these moieties can be combined into a single chimeric peptide without affecting the β-barrel secondary structure of the AFP peptides and to test their efficacy. This study also helps in probing for any potentially interesting effects on the fungal membrane upon AFP binding. 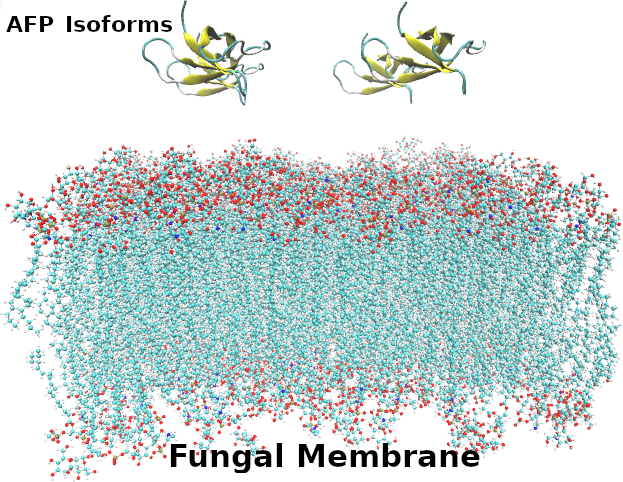