Introduction: The interactions of ultrashort-light pulses with solids and nanostructures is a continuously growing area leading, for instance, to the recent and ongoing construction of big dedicated facilities (free electron lasers). Ultrashort pulses of a few femtoseconds can be produced induce highly non-equilibrium conditions in the excited solid. Such non-equilibrium state is characterized by atoms near their initial conditions and excited electrons at several 10000 K, which dramatically change the bonding properties of the nearly unaffected atomic lattice. This direct manipulation of the bonding properties in a solid by light pulses seems to be ideal to control vacancy or defect motion in a crystalline environment, which could be used for efficient nitrogen-vacancy (NV) color center formation. Color centers in diamond are widely used in many technological applications, like quantum sensing, secure message encryption and biological
imaging. Within this project we performed ab-initio molecular dynamics simulations on femtosecond-laser excited diamond cells with vacancies and N impurities. Since the impurity density is in general in the range of a few percent the used diamond supercell has to contain several hundreds of atoms. On an ab initio basis such computations are only possible on modern high-performance computer facilities.

Methods: In order to resolve the microscopic pathways followed by the atoms in solids after intense femtosecond-laser excitation we intend to employ a molecular dynamics code based on Mermin's electronic-temperature-dependent density functional theory that has been developed in our group. Our Code for Highly-excIted Valence Electron Systems (CHIVES) uses local basis sets for treating the valence electron system. The tightly bounded core electrons are rep- resented by norm-conserving pseudopotentials. Order(N) methods for the construction of the Hamiltonian and overlap matrices are used. In order to use CHIVES efficiently on a HPC the subroutines are implemented OpenMP and/or MPI parallel. As a result, we could show for a highly non-symmetric atomic configuration that CHIVES used to be about two hundred times faster than state-of-the-art plane-wave codes. At present we can perform on the Lichtenberg Cluster simulations of supercells with up to 1200 atoms at DFT accuracy.

Results: Performing ab initio molecular dynamics simulations of a diamond crystal that has several vacancies allowed us to understand the changed atomic mobility after a femtosecond-laser excitation. The mobility of the vacancy and the surrounding atoms is increased after laser excitation. As a consequence, after a sufficiently high excitation, neighboring atoms to the vacancy start to interchange their positions with the vacancy. In this sense the laser-excitation starts a vacancy diffusion process. This effect finally leads to the formation a NV center on an ultrafast timescale. In our simulations an additional nitrogen atom was initially introduced in the diamond crystal with vacancies. We took care that this nitrogen impurity was not located next to a vacancy. After exciting the supercell, we obtained that the vacancy is travelling towards the nitrogen impurity until they form a NV center. In conclusion, our ab initio molecular dynamics simulations of laser-excited diamond in which a crystal vacancy and a nitrogen impurity are not nearest neighbors, clearly show an ultrafast NV center formation process. 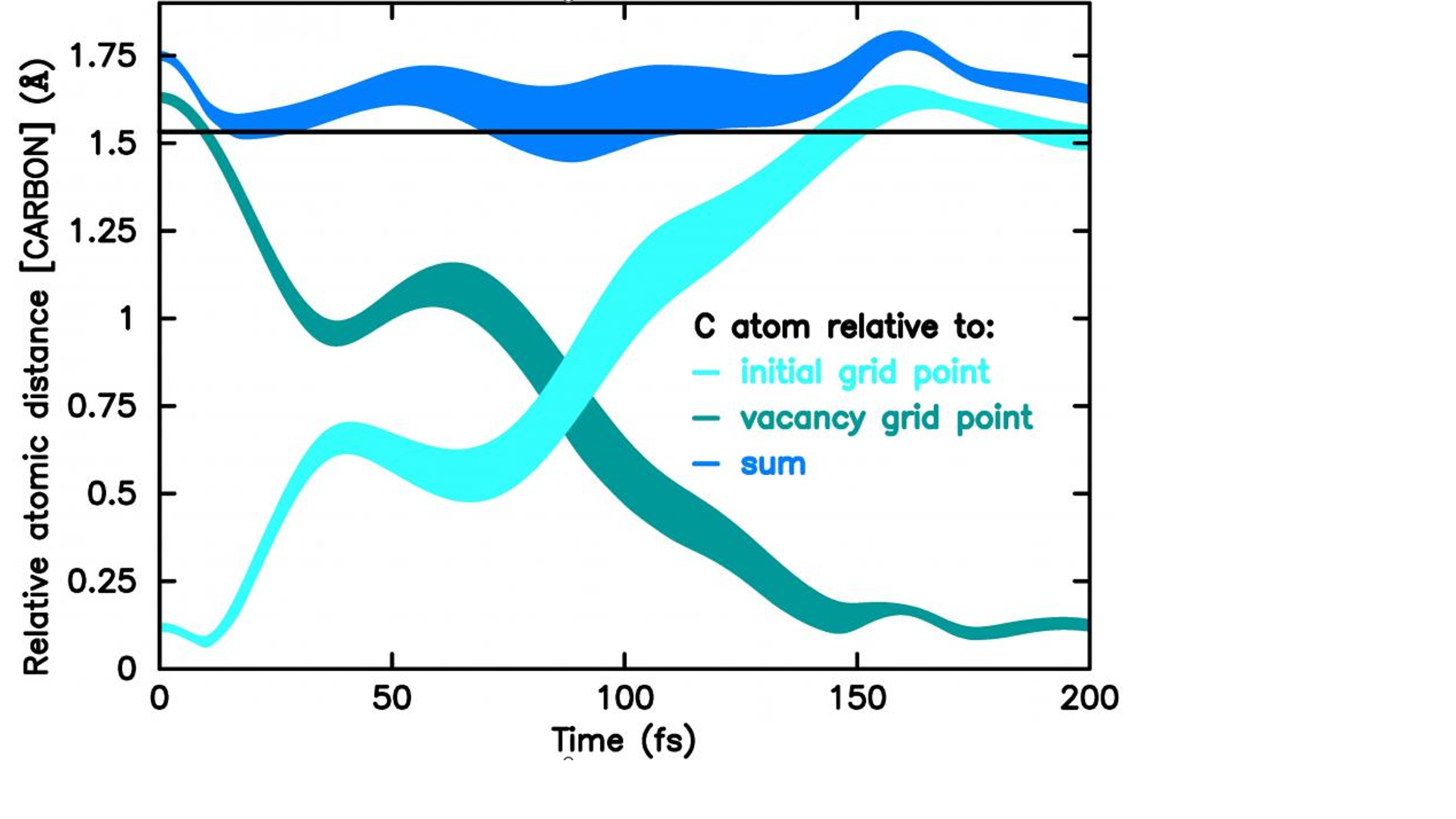